A few months back we played Papers, Please ( a game by Lucas Pope ) for a Dev Night Game Club. I don’t often play the games, for various excuse-ridden reasons, but that week I did have a chance to play it. I thought it was pretty fantastic all around, but particularly from a game design and mechanics perspective.

I never actually finished it, but at some point I probably will go back to it because it is one of those games whose basic gameplay is intriguing from the very start.

At its heart, it’s a spot-the-difference game. You’re a checkpoint guard who determines whether people are allowed into the country. You make the decision to allow or deny them entry based on certain rules ( allow only people of this nationality, allow only people whose papers’ identification numbers all match, don’t allow people without this type of paper, etc. ) and the evidence that they provide you ( their papers ).

On top of that, there’s a slight management aspect to the game. The better you perform, the better able you are to support your family. There’s also a very well-written, thematically coherent, and humorous narrative written on top of all this ( oppressive Eastern Bloc nation ).

What I Liked Most

So while all of the art and story was nice, it was really Pope’s incredible implementation of the spot-the-difference mechanic that hooked me.

The game design does several things that I like.

It tests your working memory and attention really well. You need to become familiar with and be able to apply a changing ruleset for what matches and what doesn’t.

It adds time pressure ( you only have so much time per day ) and consequences ( your family will die if you don’t manage your output properly ) This spices up an already difficult task with some motivation.

The actual mechanical inner loop of the game is highly refined. This is primarily the sound effects and rhythm of getting papers, checking information, pulling out the stamp, stamping the visa, throwing the papers back. Nearly everything about that process was pleasurable, and provided lots of feedback.

As I played, these three features of the game combined their powers and did a fantastic job of making me feel like I was getting better at my shitty in-game job. It took a set of pointless, humdrum computer interactions, and presented them to me in such a way that I not only tangibly improved my ability to perform those tasks, but I found myself enjoying the fact that I was doing so.

That was the genius of the game, I think. That it tapped into that rather abstract feedback loop of learning, improving, and reveling in the improvement.

The importance of sound design in feedback and the inner loop. I truly think that the game made even more of an impact on me because the feedback of the inner loop was so satisfying. It just felt good stamping that stamp and getting your rhythm down.

Humans will revel in being given a set of arbitrary rules and slowly learning how to navigate and apply those rules. On the one hand that’s just a fundamental tenet of what games and game-playing are. On the other hand there’s also a more narrow application of that notion in game design. I’m willing to bet that nearly anything can be made interesting, so long as it’s presented properly, coupled with good feedback, and progresses at a proper pacing.

Here’s a cool prototype made by Lucas Pope for a Ludum Dare warm up: The Republia Times. You see a lot of Paper’s Please’s theme and visual style in it.

And holy crap, I don’t think I’ve seen any other game with this many awards. Did not realize the extent of it: 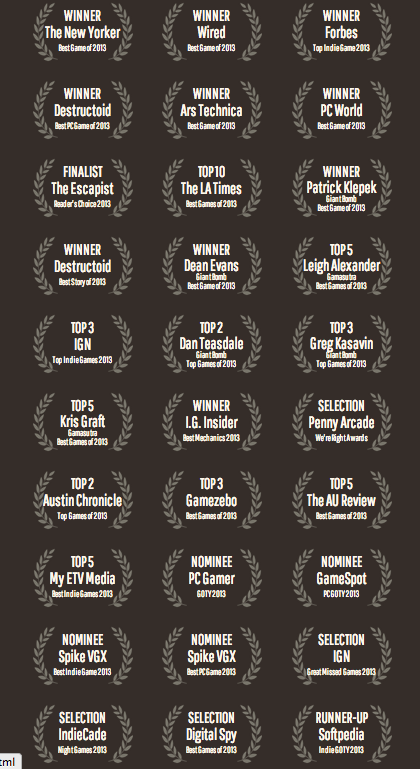