In an article from Chinanews.com about the official use of the term “soft power” during the Congressional meeting and reports (soft power as in cultural influence, versus hard military/economic/technological power), there was this little blurb about media openness in the PRC. It’s good for a few chuckles.
<blockquote>In the news and media world, China has shown positive changes in its degree of openness and transparency, and has received the approval of international public opinion. During the 17th National Congress, there were foreign journalists who expressed to China News Agency reporters that they hoped China would be able to maintain this positive trend. They also believed that China did not need to be excessively sensitive to criticism in overseas news reports because this is completely normal for every rising superpower.</blockquote>
I feel like some of the stuff I read here would make for good fiction. Like a report I read in a recent Chinese edition of Popular Science about “creating a green Beijing” for the Olympics. From the data in the article it would seem that I’ve apparently been walking around the Garden of Eden and I didn’t even realize it.

Probably because the Great Firewall has blocked the ISP for the Tree of Knowledge.

And from the same site here’s a picture of Tian’anmen Square all dressed up for the occasion. 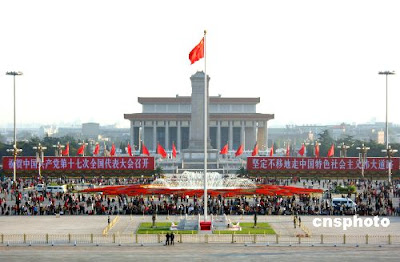 Banner Left says, “Congratulations to the Chinese Communist Party for Convening the 17th National Representative Congress”. My translation is a little Hallmark-y, I admit. Perhaps there’s a more formal way it’s normally translated, but hey, that’s what it says literally. They’re congratulating themselves for holding Congress, can’t argue with that.

I’m sorry, but I think that gigantic political slogan banners creep me out more than aliens used to. They’re so kitschy they make me feel slimy. On the other hand, I’ve been slowly turning my viewpoint around about China’s political development. I mean, the banner doesn’t say “Resolutely Walk the Great Path of Marxism-Leninism” as it might have decades ago. Or even “Steadfastly Walk the Great Path of Mao Thought”. I think of it this way, they’re now not trying to change their system to fit a rigid political philosophy, rather they’re slowly (damn slowly) redefining their political philosophy to fit the realities of their system as it interacts with the rest of the world.

I still wish they’d get rid of all the canned statements though, it just smacks of 1984 to me.