I went to go see (not an entirely adequate verb, in this case) Sleep No More last night, and left it impressed enough to write a damned thing about it. I haven’t written a blog post in forever. So, kudos to the show for that. 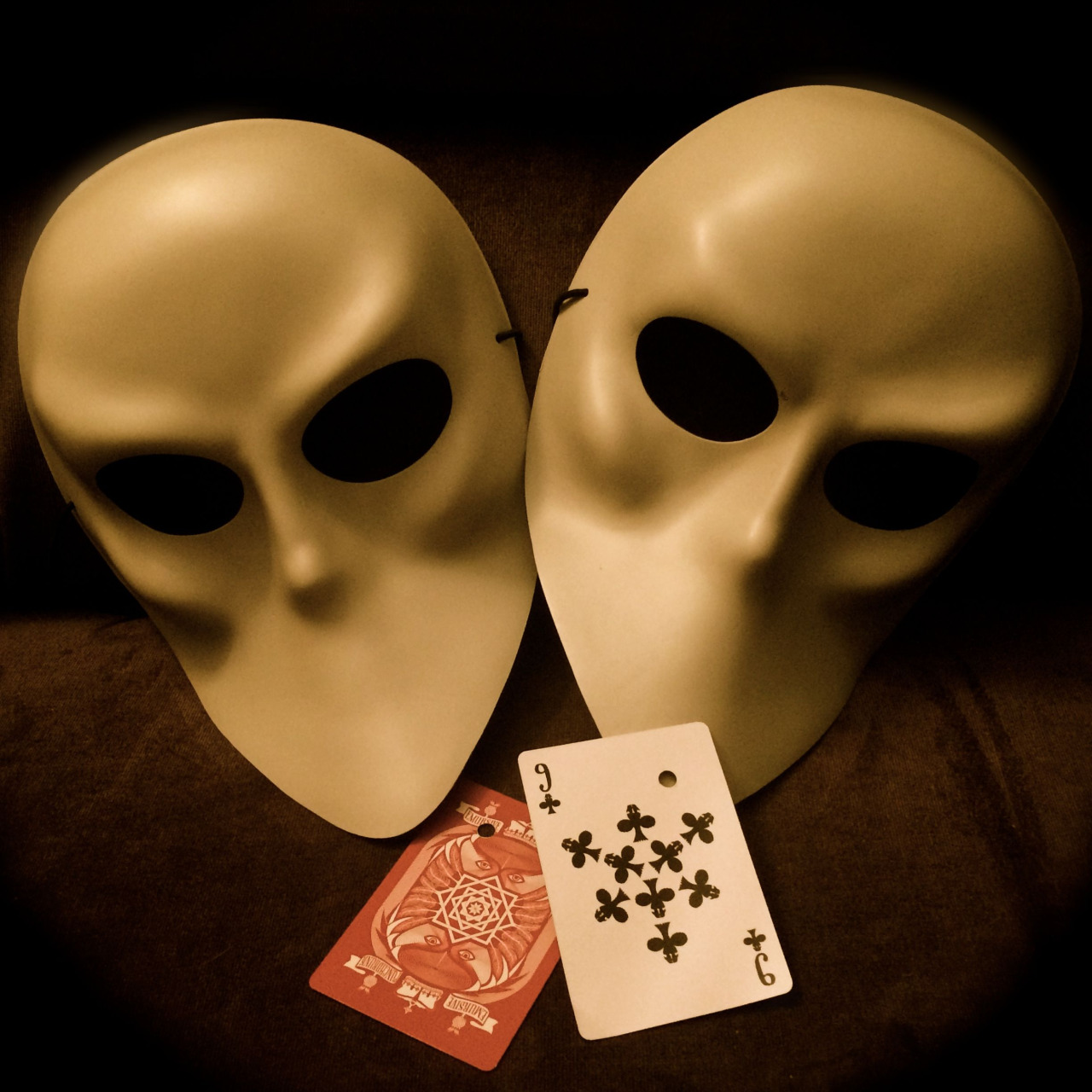 The gist of Sleep No More is that a six-story building becomes the stage, and the masked audience is allowed to wander around for two and a half hours and catch scenes of the story being acted out in different locations in the building. I’d call it a very mild version of participatory theater, because it’s still more voyeuristic than interactive.

I’ve definitely never experienced anything like it, in terms of performance art (or any other terms, actually). But what really impressed was how much it can teach and inspire from a game design perspective. Here were my main takeaways, in no particular order.

I don’t think I really grasped the size of the performance space before I arrived. It takes place in a six story Chelsea building, with every floor dedicated to various rooms or sections of the story. So it’s a large space to start.

On top of this the dark ambience and layout of the different settings really added to that sense of immensity and ability to lose yourself and be surprised by where you were when you turned a new (or what you thought was new) corner. The non-linear layout and multiple entrances/exits/(and secret entrances you couldn’t access) also fostered the feeling that there was more space than there actually was. 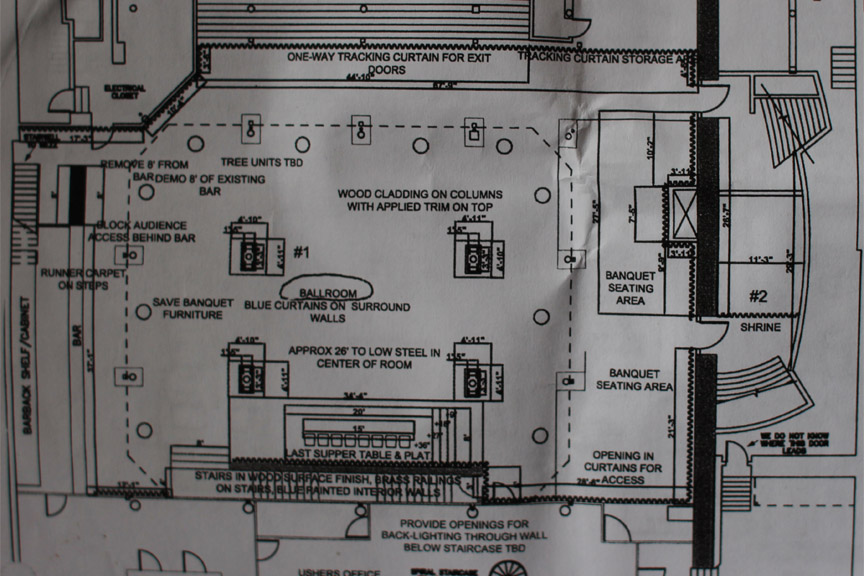 It genuinely felt like the exploration of a map or level in a game, especially because of how the settings were “compressed”. For instance, there were rooms in the hotel, and also a graveyard, ruins, a forest, an asylum, and so on. You would transition between these different environments (skipping out on the long walks you might have to take in the real world) and yet the experience wasn’t jarring. Very much like a video game creating archetypical environments for a player, rather than trying to plot everything out true to real life.

The game design lesson being that space doesn’t necessarily need to be large to evoke a sense of massiveness or variety. It’s more about the contrasts between linked spaces and ease with which those spaces can be “grokked” by someone wandering through them. And if there is empty space, it should serve a purpose, and not merely take up the player’s time in crossing it.

Details pervade the entirety of this show. Just another aspect of the scale of it. The set designers must of had a field day and I can’t imagine how long it took to put it all together. Glomming onto the last section, the various settings weren’t necessarily arranged “realistically”. It was more stylistic. First, places were stripped down to their elements, and then embellished with a style consistent with the show’s dreamlike/nightmarish aesthetic.

For instance, the “tailor’s shop” room. Not everyone knows what a tailor’s shop from the 1920s might look like. But when you’ve got bolts of cloth, scissors, a sewing machine, and so on, you understand those are symbols that represent a tailor, and make the leap that this is probably a tailor’s shop. 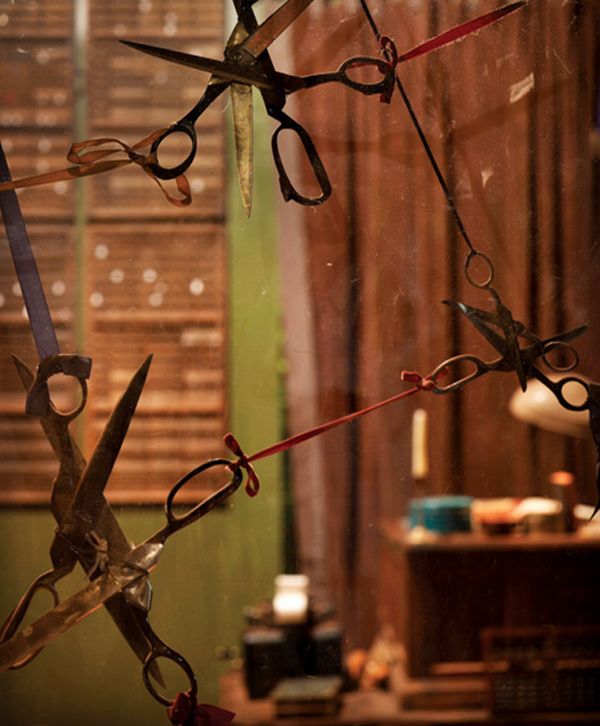 Then, these items aren’t just laying out on the counter. The scissors are arranged and suspended by string in a strange weblike tableau in the window. The symbolism is simple, and the arrangement is arbitrary, complex, and beautiful in its own way. And it’s just a single detail out of hundreds.

I think it embodies one of my personal favorite rules of game dev, that aesthetic cohesiveness is more important than aesthetic quality. It’s great if your art reaches the fractal level of Sleep No More’s set design, where every detail at every level fits into the whole, and almost nothing jars the player out of the experience.

Another “scale” element of the performance was the distributed nature of the story. It’s a bilocation issue. There are five accessible floors, a plethora of rooms, a dozen or so characters, but you have only two eyes and a single viewpoint.

Watching any one scene being acted out in front of you precludes you from seeing any other scene that plays out at the same time. Or you may be in a space where nothing is going on, and not witnessing anything, though maybe noticing details that help explain the story.

I left the performance knowing only a fraction of what went on, and understanding perhaps even less of the story. But I didn’t feel let down by that! It made what I did see more impressive, and left me wanting to see more and explore things differently. (Though not for $100 bucks a pop, christ.) It’s real life replayability.

This isn’t an unexplored mechanic in video games. Majora’s Mask is probably the canonical example. The same events, happening over and over, and on each playthrough you only experience the events that you are present for. And slowly you unravel the story and it’s a fun as shit experience. 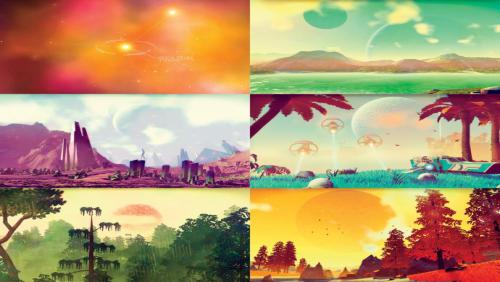 Yet the current zeitgeist in games (and this might be my own observational bias) leans toward procedurally generated replayability, or open world massiveness. Not that I don’t enjoy those sorts of games, but they’re definitely very different from games that track a single complex set of events that flow around the player. Where the replayability comes from dropping the player off upstream over and over again and letting them make their own way.

The freedom of being able to explore and the limitation of only being able to be in one place at one time are the key elements of what made Sleep No More feel like a game to me.

First, what was the point of it? Was it to see as much as possible? Was it to figure out what was going on? Was it to discover secrets that other people were missing? Mapping out the boundaries of what was allowed occupied one part of my head. 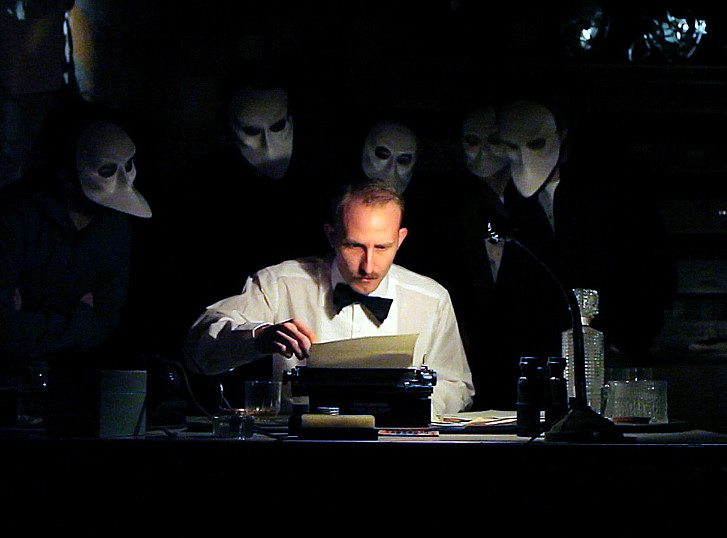 I spent a little time in the beginning trying to read notes and letters. Got a little Elder Scrolls with it. The hope being that some of the story would be revealed in words. I stopped that really quick. I have no doubt that there’s backstory and hints and subtle cues in much of the paper in that building. But there’s also a lot of dreamy nonsense.

I quickly turned over to the opinion that it was a theatrical performance, and the people would be more important than props, and I would be better off sticking with them. 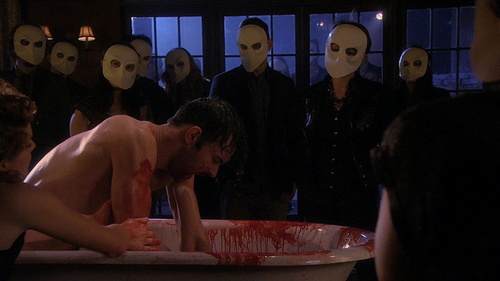 And when the scene finishes and actors go their different ways, who do you follow? Do you chase the crowd, or do you walk in the opposite direction? I tried to do the latter, because I hated following the crowd. And that resulted in some of the most fun moments. Being the first person to catch a character emerging from some hidden passageway. Being in an empty place where action suddenly coalesces around you.

The game design takeaway here is that sometimes that thirst for experience that drives exploration can create a hugely rewarding experience, even without true interaction. Sleep No More does this really well, it cycles the actors and guides crowds efficiently and smartly. It creates drama and then distributes effectively, using the actors like a net to draw in more viewers, feed them, then disperse them in different directions.

One of my favorite thoughts during the night was how much the audience added to the ambience. Everyone silent in their masks, invisible voyeurs that the actors only sometimes interacted with or sensed. Sometimes audience members would play their parts, lounging uncaring in a seat, handing off items to the audience members. It was clever and fun.

It fit in with the atmosphere, like we were ghosts watching the living. Feeding off of their life and action, then following them seeking more. Sometimes it was difficult to tell if the consternation or horror on the actors faces was a reaction to their circumstances or the awareness of this faceless crowd.

But it made me think that there could be future performances where the crowd acts more like the forest spirits in Princess Mononoke – passive, omnipresent watchers, but playing a role in the ecology of the performance.

In that speculative performance, maybe they vote with their feet. Maybe following one character enriches that character’s storyline. Maybe having more ghosts in a certain setting increases the likelihood of events occurring in that place. The audience would direct the performance, in a sense. Maybe there’s stuff like that already out there.

Great show. Worth at least one go. Not perfect but the novelty and enjoyment I got out of it so outweighed any inconveniences. Glad I got to write this all down.