Last and First Contacts; The Merchant and the Alchemist's Gate

The lake’s lapping on the shore, and the internet’s down. And the weather’s cooler and less humid than in Philadelphia (read: better).

The plane ride to Milwaukee and car ride up to Door County both went smoothly, and I managed to finish a collection of short stories by Stephen Baxter, in a book called Last and First Contacts, as well as a novella by Ted Chiang, The Merchant and the Alchemist’s Gate.

Last and First Contacts was an expected little romp of short sci-fi stories. Most enjoyable, some meh, with some gems. I figure I’ll just blurb about all of them.

Erstkontakt takes place in WWII, on the Nazi side. An alien equivalent of a rover arrives from Alpha Centauri, and lands in the lap of Werner von Braun’s rocket research facility. The story is mainly meant to foreshadow the possible implications of such a landing. How it might provide technological hints that would inspire the Nazis to leapfrog Allied weaponry, what a Nazi space exploration agenda might look like, and how they might treat the matter of contact with extraterrestrials. Not peacefully, the book assumes.

In The Abyss of Time

In The Abyss of Time provided one extremely memorable image. The sci-fi tech here was a “cosmological bathysphere” that utilized an abnormal concentration of dark energy to propel the vehicle through time.

In any case, my favorite part of the story was the image of the universe at the far edge of time, when everything has expanded to near-nothingness with the exception of the last remaining universal consciousness, which spends most of its time dormant in order to conserve its limited resources. Like the deep ocean where occasionally foodstuffs will fall from the more abundant shallows to the deep, this consciousness snatches the dense matter and energy of time travelers who venture to the end of time from many different species and civilizations who’ve independently discovered time travel.

Halo Ghosts I was sort of meh about. It was an okay story, but it did at least introduce a concept I hadn’t heard of before. A Berry phase, or geometric phase,  is a physics concept, which Wikipedia densely introduces as

a phase acquired over the course of a cycle, when the system is subjected to cyclic adiabatic processes, which results from the geometrical properties of the parameter space of the Hamiltonian."

In any case, the application in the story is of explorers who search comets for very old and untouched matter, because they have a device that’s able to read some quantum mechanical Barry phase that allows them to essentially determine what the matter was like and what was around the matter at some energetic time in the particles’ histories.

I skipped this one because I’d read it before. But previously I had enjoyed its take on sentient machines and the mid-future of humanity in the face of climate change and high technology.

The Children of Time

This was very reminiscent of Baxter’s Evolution novel – a series of snapshots over extremely long swathes of evolutionary time.

Unlike Evolution, however, where humanity evolves toward and then away from homo sapiens sapiens, in The Children of Time Baxter plays with the concept that humanity’s ability to modify its environment stunts the normal process of evolution, essentially freezing humanity as homo sapiens sapiens through the ages. Though industrialized humanity used up all the easily available resources and our descendants are never able to reach a similar level of technological development.

It makes the imperative to not mess up this particular go at technological civilization seem more important.

These stories both deal with intelligent stromatolites. The first in the context of a transformed earth, and the second out in space. Both also involve an exploration of a transformed humanity. The first is through a biological re-engineering of the species, the second through a technological discovery that makes FTL travel possible, opening up the universe to humanity.

Flash fiction. A cyclical story tracing a rise and fall of a civilization as seen through a road.

This story deals with the Big Rip ( a number of the other stories in this collection also mention it ). It’s actually the first time I’ve been exposed to this particular cosmological theory, despite the theory having been around for a decade.

The Big Rip describes an ultimate fate of the universe, wherein the expansion of universe actually tears apart matter at a certain point. Last Contact tells a story of that certain point being right now.

The Merchant and the Alchemist's Gate 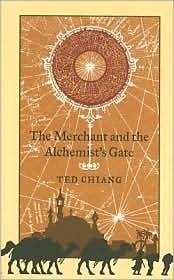 Possibly the best novella I’ve read this year. This isn’t so much sci-fi as an exploration of time travel paradoxes and the human meaning to be found within the limitations of such travel.

A big draw for me was the story’s setting and narrative device. It takes place in Baghdad and Cairo, during some unnamed caliphate, and the narrator is Fuwaad ibn Abbas, who is brought before the caliph to tell his story. He proceeds to tell his story in the form of several smaller stories, each of which contains its own moral lesson about time travel.

It’s a very fairytale like story, both entertaining and educating, but also very sci-fi, exploring a realm of possibility that’s one step farther than the every day.

Unlike a ton of sci-fi stories, which might be intellectually stimulating but of questionable literary merit, I really felt for the main character in this novella, and was touched by the whole experience.

I’ll end with two quotes from the novella:

"Four things do not come back: the spoken word, the sped arrow, the past life, and the neglected opportunity," and I understood the truth of those words better than most.

Nothing erases the past. There is repentance, there is atonement, and there is forgiveness. That is all, but that is enough.