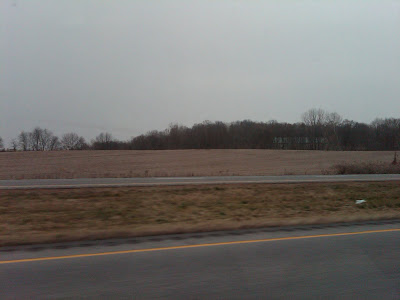 Well, that was the view from my drive down to Bloomington on Monday morning. It was about eight o’clock in the morning, it had probably stopped raining just hours before, and it was not quite cold but the lingering damp put on a fairly convincing act of being chilly.<div>
</div><div> But I was content, for whatever reason, and was savoring a day that seemed beautiful to me, again, for whatever reason. It might even have been enhanced by a little schadenfreude, knowing that while most others were glumly anticipating the day, I was humming with happiness. Perhaps it was the colors that made the drive wonderful. Gray, I’ve always liked, but Monday’s gray wasn’t the heavy gray of summer or the crisp gray of winter. It was reflected in the muted tans of bare harvested fields, and in the golden cornstalks that were beginning to lose their luster. The fiery leaves had mostly fallen from the trees and browned in defeat, coating grass that was still green in many places, but in other places fading. And then the inevitable bleak, endless asphalt running by underneath. If I had to personify the day, I’d call it pensive. And maybe it was, because it was the penultimate day of seasonal death. On its final walk to the gallows, if the cliche ever holds true. Immortal in its the realization of its impermanence.</div><div>
</div><div> And long gone it’s been too, it’s Thursday and the whole week’s weather has sucked! Sucked, of course, meant here as a non-pejorative term.</div><div>
</div><div>-=-=-=-=-</div><div>
</div><div>Interestingly, while looking up the spelling of schadenfreude, Wikipedia gave me its lexical brothers and sisters, which I plot here for your enjoyment:</div><div>
</div><table border="1"><tbody><tr><td>Stimulus\Response</td><td>Positive Feeling</td><td>Negative Feeling</td></tr><tr><td>Another’s Happiness</td><td>Mudita
(Sanskrit, happiness in another’s good fortune)</td><td>Envy
(unhappiness in another’s good fortune)</td></tr><tr><td>Another’s Misery</td><td>Schadenfreude
(German, happiness in another’s misfortune)</td><td>Empathy/Compassion
(unhappiness in another’s misfortune)
</td></tr></tbody></table>
<div>You know, I’m not really sure about that last one, there must be a better word in some language. It strikes me that empathy and compassion don’t necessarily entail unhappiness, it seems more like emotional “understanding” or “harmonization.” But perhaps that’s enough.</div>