The World Inside (Robert Silverberg) 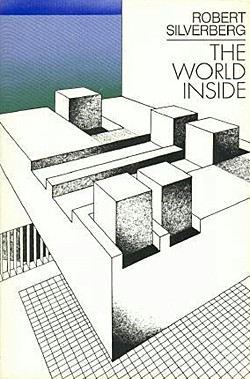 Thomas More coined the word utopia by combining the Greek “ou” (not) and “topos” (place); in other words, nowhere. Â Dystopia, (“dys-“ the Greek “bad, abnormal, or difficult”) was first used by John Stuart Mill, in a parliamentary speech. Though sometimes dystopias contain elements of utopia and vice versa, I can’t find a word that suits a world that is both (Wikipedia simply describes Â such worlds as combinations). So I’ll just call Silverberg’s “The World Inside” an amphitopia (both, on both sides of around) or a syntopia (with, together, same).

Then again, maybe it evens out and an “amphitopia” is just a normal world.

In Silverberg’s world, humanity has embraced the principle of “go forth and multiply” with a religious fervor, and human society’s main preoccupation is procreation.

Overpopulation has become a meaningless word, and humanity busies itself with steadily increasing its numbers. A considerable amount of technological and social engineering has been implemented to make such expansion possible.

First off, all of humanity (except for a very small portion of the world population that grows food) is now concentrated in thousand story arcologies. These dot the landscape, and represent compact, efficient, enclosed habitats for the majority of the world’s dozens of billions. Because the birthrate outpaces the deathrate by a large margin, there are always new arcologies under construction, and because of the efficient use of land there is still plenty of landmass on earth available.

Second, in order to deal with the pressures of such a dense population, sexual mores have been reduced to almost nothing. Families are still built up in nuclear units (with the more kids the better), but there’s no notion of adultery or strict monogamy. In fact, refusal of someone’s sexual advances is almost a criminal faux pas. Portions of the book read like something out of a teenage boy’s dream. The idea is that all sources of mental frustration are to be dissipated as quickly as possible, this is largely done by creating a society in which all corporeal desires can be easily satisfied. Food is readily available, drugs are readily available, sex is readily available, etc.

Third, punishments are swift and harsh, and the threshold for criminality is quite low. The theory here being that disruptive forces are magnified by the level of human density, so bad elements must be removed at once.

But what’s most interesting to me, and what is left to the imagination in the book, is how the world got this way in the first place. My inclination is that mankind would simply continue…[note: cuts off here because I’m just finally publishing this article on February 19, 2017, and I can’t remember whatever train of thought I was originally on.]

Quotes that amused me:

“And isn’t that what life is all about, to wring all the sensory percepts you can out of the outputs drifting past your head?”

“‘Siegmund is ambitious,’ Jason replies evenly, ‘and I’m merely a time-server. I don’t deny it. Maybe it’s genetic. Siegmund strives and gets away with it. Most men don’t. Striving sterilizes, Micaela. Striving is primitive. God bless, what’s wrong with my career? What’s wrong with living in Shanghai?’”