So I’ve moved on from buying my daily 10-cent newspaper, which I can never even put a dent in anyway, and I’ve gone and joined everyone else in the 21st century! I now make great use of Google Desktop’s newsreader, which provides me with all the random news I need. I get everything from picture series of bikini contests down in Hainan to chengyu-laden articles on obscure historical happenings.

So yesterday I saw this picture (I know my last blog had that bit about needing authors’ permissions, but I didn’t say I was going to stop doing it, I’m just not going to do it as much. Huge difference!) on Xinhua’s site. It’s Yao Ming in Taiwan, volunteering to help these children out with their PR work: 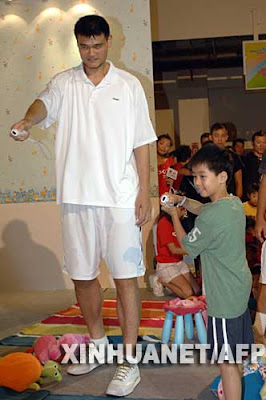 Best part was the caption:

Just in case you weren’t sure who was who!

On a more personal note, it bothers me that they captioned this as a “computer game” rather than a “video game”, and didn’t even bother to mention that it was a Wii! It’s probably because China didn’t want to draw notice to the embarrassing fact that Taiwan has one and the mainland still doesn’t.